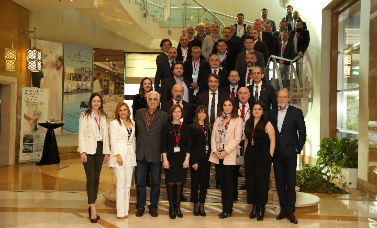 The meeting, which was held by paying attention to the pandemic rules with the participation of approximately 45 officials from 32 member companies, started with the National Anthem after the opening and a moment of silence in accordance with the agenda.  Afterwards, the Presidential Board was elected.  Mr. Murat Önay, Ms. Buket Böke and Ms. Merve Yorgancılar Iştırmak were elected to the Court upon recommendation.

Before the closing of the meeting;  Mr. Hasan Danişment, one of the previous period managers of BEYSAD;  M. Bahadır Balkır, President of the Board of Directors of the previous term, took the floor and conversations and meaningful exchanges about BEYSAD were made.

Guests from the BEYSAD Center project were included in the second part of the meeting, which is a joint project of BEYSAD-Özyeğin University-TÜSİAD and focused on the Center of Competence Project.

Section 2 started with the opening speech of BEYSAD President of the Board Mr. Ş.  Burak Özaydemir.  In his speech, Burak also reminded about the beginning and development of the Center Project.  Mr. Özaydemir said: “When the European Union opened its calls for the new term in 2016 within the scope of the Competitive Sectors Program carried out by the Ministry of Industry within the scope of the IPA program, our Board of Directors took a decision to apply for a project, seeing the compatibility of the program with our sector and association objectives.  Our application "Digital Transformation of SMEs in Turkey with the Establishment of an Industry 4.0 Competence Center" with a budget of approximately 10 Million Euros, which we created in cooperation with Özyeğin University and TÜSİAD, received project approval at the end of 2017 after detailed evaluations, and official signatures were signed at the beginning of 2018.”

Next;  BEYSAD-Özyeğin University Industry 4.0 Center for Competence and Digital Transformation General Manager Assoc.  Dr.  Erinc Albey made a presentation titled "Informing about the Center's activities".  At the end of the speech, a Plaque of Appreciation was presented to him by D. Yasemin Aksu, Vice President of the Board of BEYSAD.

After the intense preliminary work of the project, the tender processes started in 2020 and many equipments have been delivered from the completed tenders.  The technical support tender, which consists of experts who will support the establishment of the center and the development of its infrastructure, was also completed at the end of 2021, and the Mckinsey-MEXT-Piri consortium team, which won the tender at the beginning of 2022, started its consultancy work intensively.  The operations continues to deepen and enrich the content and scope of the center with the deep experience of the technical consultancy team.

In the impressive presentation, the emphasis on the necessity of change on the organizational and human side in addition to technology in digital transformation was remarkable.

A Plaque of Appreciation was presented to him by BEYSAD Vice President of the Board Mr. F. Murat Öney.

We would like to thank all our members and stakeholders who participated and contributed.