Activities
BEYSAD Is At Berlin IFA Fair Again After The Pandemic 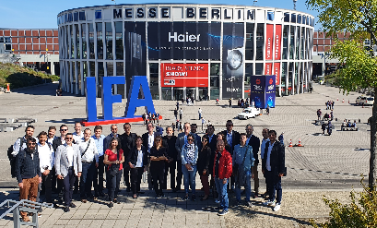 As BEYSAD, we are happy to be able to visit the IFA fair again this year after the pandemic break, as it has been for the last 8 years.

At the fair, which we attended with a total of 32 people from our 20 member companies, we had the opportunity to see the innovative products of our brands that we are proud of producing in Turkey, as well as to gain insight into what has happened in this regard in the world and where the technology is going.

In order for the trip covering the dates of 03-05 September 2022 to be more efficient;  as BEYSAD, we had the opportunity to see the stands of very special stakeholders such as Beko-Grundig, Vestel, and Haier by making special appointments.  We were able to follow the developments in all the stands very closely, accompanied by very valuable managers.  We congratulate each and every one of them.

This year, for the first time, the “Global Market” section was located in the main area of ​​the fair and seeing our members who opened a booth in that section - Edes Etiket, Gürmetal and Technocast made us both happy and proud.

IFA Berlin, the leading trade fair for the International Consumer Electronics and Technology Industry, is held on 02-06 September 2022.  In the event, which is the most comprehensive technology show in Europe, the latest technological products and developments are introduced to the visitors.  The fair, which has been held since 1924, is open to both commercial visitors and the public.  The IFA 2022 fair, which opened its doors in Berlin, the capital of Germany, hosted many remarkable new technologies this year as well.  New technologies that we will see at the end of the year or in 2023 have been showcased.

One of the biggest white goods manufacturers participating in the IFA 2022 event was Arçelik with its Grundig-Beko brands.  Arçelik CEO Hakan Bulgurlu's opening speech was also watched on Friday, September 2nd.  We will be sharing the details of the subject with you in another news.

Arçelik Chief Executive (CEO), Hakan Bulgurlu, who positions sustainability as a business model in its entire global organization, called for an emergency action plan for the industry in the fight against climate change in his speech on "the planet's impoverishment as the welfare level of humanity increases" at Europe's largest consumer fair IFA.  In his speech, Bulgurlu also talked about the SaveWater technology designed by Arçelik to save water and reduce waste for households.

Vestel, which develops environmental technologies to help individuals contribute to a sustainable world as well as its own activities, showcased many of its innovative products at IFA 2022.  The Microfiber Filtered Washing Machine at Vestel's booth, which filters the micro-level fiber particles that pass into the water from the laundry and prevents them from being thrown out with the discharged water, was remarkable.  With this technology, which protects water resources and the health of living things, Vestel aims to reduce the pressure on natural resources.

The Hydroboost technology washing machine, which sprays a mixture of water and detergent on the laundry from 20 different points in the drum, provides water and time savings with the benefits of shortening the duration of different programs and increasing the load capacity.

In the washing machine with Dose-On technology, there is no need to add softener and detergent before each wash.  This technology, which automatically adjusts the dosage of detergent and softener according to the dirtiness and load of the laundry, makes life easier for the users and prevents the use of extra chemicals.

For users who do not want to use additional chemical disinfectants, PureBeam+ technology, which provides high level hygiene in laundry and eliminates bacteria and viruses with UV-C rays, both saves water and prevents the use of extra chemicals.

In tumble dryers, with the help of Sonic Steam technology, wrinkles are reduced by the steam penetrating the laundry (2 times less wrinkles), while hygienic, refreshing and easy ironing is provided.  With Cross Dry technology, users are offered a 30 percent faster drying time compared to traditional systems.  In addition, with the water recovery feature, the water collected in the dryer can be used in the washing machine.  Thus, users can save water.

A+++ – 20% Energy Class Tumble Dryer uses one of the most environmentally friendly refrigerants, R290.  The global warming potential of R290 refrigerant is 500 times less than other refrigerants.

G Series washing machines with 7 to 14 kg capacity include new drum model, new side panel and new washing technologies also offer energy savings of up to 20 percent.  In addition, the modern and stylishly designed control panels of this series offer convenience and a unique laundry experience to users.  Sustainability is one of the main themes of the G series.

South Korean manufacturer Samsung has already announced the Galaxy Z Flip 4, Galaxy Z Fold 4, Galaxy Buds 2 Pro and Galaxy Watch 5 with the Unpacked 2022 it organized in the past weeks.  Samsung presented a wide range of products at IFA 2022, from televisions to washing machines.  The company also announced some innovations for the internet of things (IoT) SmartThings.

Another technology giant LG has added new ones to its "breakthrough" display technologies.  This year's event also included studies on smart device and smart home technologies.

Europe's largest consumer electronics fair, IFA 2022, held every year in Berlin, witnessed a great race this year as well.  At the fair, which opened its doors on September 2, artificial intelligence, voice commands and 5G home appliances remain on the stage, while this year, especially health-supporting and environment-friendly technologies attract attention.  While the weight of white goods companies was seen in IFA 2022, one of the largest consumer electronics fairs in the world, Turkish companies also gave pride in the fair.  Brands and companies from Turkey such as Grunding-Beko, Vestel, Arzum, Simfer, Kumtel took their place at the fair with their new products.

BEYSAD Chairman of the Board Ş.  Burak Özaydemir made a statement about the trip: “As BEYSAD, we think that Turkey's position as a global leader in production in the White Goods Industry requires it to have a good command of current trends and technologies.  In this context, we had organized our fair participation, visits and delegations with a global vision before the pandemic to cover Europe, America, Asia and Africa in particular.

With the relief of pandemic conditions this year, we started our first international event with the Automatica Fair in June.  Now, we are pleased to participate in Europe's leading home technologies fair IFA with a large delegation.  We took great pride in the fact that manufacturers from Turkey took part in the fair with their innovative products and wide stands.  Sustainability and energy efficiency stood out as a trend in the sector with the effect of EU regulations and developments in energy prices.  We would like to thank our valuable producers and participating companies for hosting us sincerely.”

National and international brands showcased their latest technologies and new products at the fair, where industry professionals had important meetings especially in terms of marketing and sales and therefore has a special importance for companies.  The IFA Next section was quite interesting with the start-ups it hosted…

Once again, we would like to thank all our stakeholders for their hospitality.