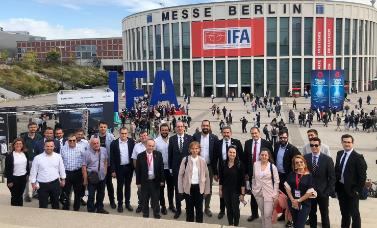 We, BEYSAD, visited IFA as we did for the past 7 years.
We were at IFA with 26 individuals from 15 member companies and we had the chance to see the innovative goods of the brands that produce in Turkey, which we are proud of, and also to get a glimpse of what has been happening in the field in the world and where the technology is going.

In order to make our trip that was from 05-07 September 2019 more productive, we visited the Chamber of Turkish-German Industry and Trade on our first day with the support of Bilgin Semiz and Cenk Tuna of Semiz Elektronik, which is our member and also handles Business Development projects in Berlin. We had a very productive and enjoyable day hosted by TD-IHK Secretary General Okan Özoğlu. Now we know that we have a major organization we can look for advice in any matters we need regarding Germany and its strong, young and dynamic team assured us that they are ready for help whenever we need. Executives from Siemens and Fraunhofer were invited to the meeting and we had the opportunity to listen to crucial presentations on Industry 4.0 and to find answers to our questions. We would like to thank all who made this trip possible and great.

The consumer electronics fair IFA kicked off on September 6 for the 59th time this year.
The fair showcases artificial intelligence, voice control and 5G-connected home appliances.
This year especially technologies that support healthy living and are environment-friendly stand out.

IFA 2019, Europe’s largest consumer electronics show held in Berlin every year, witnesses a major competition this year. The show kicked off on Semptember 6 and showcases artificial intelligence, voice control and 5G-connected home appliances. This year especially technologies that support healthy living and are environment-friendly stand out. Chinese, South Korean and Japanese companies dominate IFA 2019, one of the world’s largest consumer electronics shows, where Turkish producers also stand out. Major brands from Turkey including Vestel, Arzum, Simfer, Esco, Silverline, Kumtel, Grunding, and Arçelik took their place with their new goods. Also, Arçelik’s CEO Hakan Bulgurlu was among the keynote speakers of the show.

BEYSAD President Ş. Burak Özaydemir commented on the trip:  “As IFA is Europe’s and the world’s leading consumer electronics show, BEYSAD organize a trip to show every year. During this year’s visit, we had the chance to contact with the Chamber of Turkish-German Industry and Trade that can help our members with their operations in Germany. We observed at the show that the industry is experiencing a rapid trend regarding sustainability and connected appliances, the Chinese producers have completed their missing ranges and brands and the brands that produce in Turkey have made a significant move in terms of goods and presentations compared to previous shows. In this regard, we can say that with the decreasing consumption in Europe, competition might become more fierce in the upcoming period. Therefore, we think that it is more critical now than ever that the industry shape its future in cooperation and common mind in terms of innovation and competitiveness. Believing that our visit to the show has brought significant contributions to our members through observing industry trends and contacting with major businesses, we would like to thank our members for attending.”

IFA holds a major importance for businesses because the industry professionals build significant contacts especially in marketing and sales. At IFA, local and global brands displayed their latest technologies and newest goods. IFA Next drew much attention with the start-ups hosted.

Our first day at IFA on 6 September 2019 kicked off by visiting Haier, Hoover and Candy booths on an arranged meeting by the executives of our shareholder Candy-Hoover acquired by Haier.

Next, we had an enjoyable and impressive visit to Samsung booth arranged by Samsung executives with whom we built cooperation on the event we organized this year.

The last appointment of the first day was with Simfer. We are proud of the flamboyant and ever-growing booths of our local brands. We would like to thank them for their hospitality.

On our free time between appointments, our members had the chance to tour the Show and expressed their gratitude.

On the second day, our first appointment was with Arçelik Purchasing Director Hakan Kozan at Beko, Grundig booth. The company impressed us along with all the other visitors with their sustainability concept, with their environmentalist motto “Respected in the World and Respecting the World,” with their new goods and booth concepts proving how far they have come in recycling. We were proud and impressed and hopeful for the future of the World… Thank you very much.

Right after them, we had a tour of Vestel, Toshiba, and Sharp booths with Vestel Assistant General Manager Kemal Özgür and his dynamic team. All the product innovations were user-friendly and quite impressive. We were proud once again of the companies that produce in Turkey. We would like to thank them for their efforts and hosting us.

One of the top source of pride of this year’s IFA was that Arçelik’s CEO Hakan Bulgurlu was among the keynote speakers of IFA. On 7 September, at 02.00 P.M. the Hall was completely full and after Hakan Bulgurlu’s unconventional and impressive speech to draw attention to giving value to the environment brought down the house. We teared up seeing the respect to the World and also how respectable a Turkish brand is in the world. We would like to thank our shareholder Arçelik for inviting us to this special speech program.

Once again, we would like to thank all our shareholders for accepting us and their cheerful hospitality.

About IFA;
This year 1,939 companies attended the Show; last year it was 1,814 companies and 244 thousand visitors. One of our local brands Arçelik focused on healthy living and eco-friendly appliances and displated their new fridge imitating sunlight to keep fruit fresh. Vestel introduced the water-saving technology washing vegetables in the dishwasher.

Arçelik Turkey General Manager Can Dinçer stated that the global health goods market accounts to 4,2 billion Dollars and that this year they strategically focused on healthy living goods. Dinçer said that they will focus on technologies that cook the food in the right way and keep produce fresh in the health appliances market. In this concept, Arçelik introduced Harvest Fresh fridge that imitates the sunlight cycle and to be put on the market in 2020.

Oğuzhan Öztürk, Assistant General Manager for Production and Technology at Arçelik stated that “With this technology, fruit and vegetables can be kept fresh as they are harvested from the field and preserve their vitamins. In the fridges developed previously the blue light was for preseving the vitamin C only, while our new appliance we developed by measuring the sunlight throughout the day helps to keep the vitamins A and C for longer with its blue, green and yellow lights. The fridge also saves time by reducing the frequency of doing groceries.”

“We democratized technology”
Beko has plenty of technology that supports healthy living, said Öztürk. ”Combi Steam oven steam cooks food in a healthy way. We let our consumers participate in the design process and solve their problems economically. We call this democratization of technology.”

The market stepped on the brake
This year the consumer electronics market is expected to fall to 1.8 per cent compared to last year and reach 740 billion Dollars by year-end. The white appliances market in Turkey shrank by 9-9,5 per cent in the first 6 months of the year. Can Dinçer said,”We expect this shrinking to continue during the third and fourth quarters. However, we grew 30 per cent based on turnover during the first 6 months. This growth is 10 points higher than the market average. We benefited from R&D a lot.”

Vestel Foreign Trade General Manager Seda Kaya stated: “Vestel, bringing its technology to 155 countries and being Turkey’s export champion in the electronics industry for 21 years straight, is displaying its eco-friendly, brand new and cutting-edge appliances at IFA which we have attended for the 29th time. In all of our operations, we focus on producing sustainable solutions that are based on the future welfare of human beings, societies, and the planet in line with the Smart Life 2030 vision of Zorlu Holding. We are working with a 360-degree sustainability approach that encompasses our products and services, factories and facilities, and human resources to our business manner. The white goods we produce acting upon this vision consume minimum power and water, wash without detergent, and increase the life-span of produce with a vacuum apparatus and attract much attention from consumers.

1600 engineers of ours working at the 8 Vestel R&D Centers around the world focus on how to produce world’s-resources-friendly appliances while producing goods based on the requests and demans of our consumers. With the environmentalist technologies we use in our goods, we strive to fulfill our responsibility to leave a better world for future generations.”

Vestel dishwashers to wash vegetables
Vestel displayed 8 new goods to consumers. Vestel, focusing on ecofriendly technologies this year, introduced its new technology called VegiWash that washes vegetables using directly mains water in a reservoir added in the dishwasher. The appliance makes washing fruit and vegetables more hygienic and economic without contacting the water in the dishwasher. Based on the fact that an average of 18 tons of water is consumed to wash vegetables in a house, the company aims to help consumers avoid washing earthy produce such as spinach, swiss chard, and greens under running water and save water.

Other Goods and Technologies Displayed at IFA
ThawTech Fridge with its ThawTech technology can defreeze frozen foods in two temperature-controlled special compartments in the freezer via remote control and in a healthy way. When defreezing is complete, defrozen foods are stored in the proper cooling conditions, thus avoiding the formation of bacteria.

Jar Vacuuming Technology
This fridge also uses jar vacuuming technology – a first in the world. The vacuum technology developed to maintain nutritional values of foods such as homemade yogurt, pickles, kefir, tomatoo puree and tomato paste sucks the air in the jar out and extends their life.